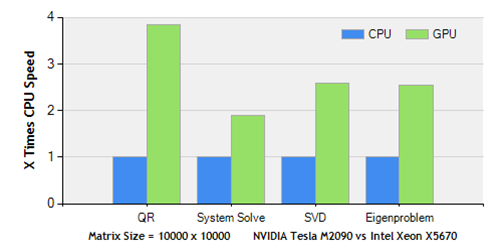 The NMathTM .NET math and statistics library from CenterSpace Software provides numerical components for financial, engineering, and scientific applications on the .NET platform.

All NMath routines are callable from any .NET language, including C#, Visual Basic.NET, and F#.

For many computations, NMath uses the Intel® Math Kernel Library (MKL), which contains highly-optimized, extensively-threaded versions of the C and FORTRAN public domain computing packages known as the BLAS (Basic Linear Algebra Subroutines) and LAPACK (Linear Algebra PACKage). This gives NMath routines accuracy you can trust, and performance levels comparable to C or Fortran. Our state of the art, object-oriented interfaces are easy to use and leverage the full power of the .NET platform.

- 32-bit support has been dropped. Demand for this has been waning for years. Dropping
it has made library usage simpler and easier.
- GPU support has been dropped. As developers, we liked the automatic GPU offloading.
However, the technical advantages have dissipated as multi-core processors have improved.
We believe that this is no longer compelling for a general math library.
- NMath Stats has been merged into NMath. This is for ease of use for our users as nearly
all customers bought both libraries.
- In summer of 2019, our pricing will be streamlined to reflect these changes.
There will be one price for a perpetual NMath license and there will be one price for
annual NMath maintenance which includes technical support and all upgrades available on NuGet.
NMath Stats will no longer be sold separately.
- To simplify development, we have merged the four NMath namespaces into one,
CenterSpace.NMath.Core. Originally, CenterSpace had four NMath products and four namespaces, these
namespaces CenterSpace.NMath.Core, CenterSpace.NMath.Matrix, CenterSpace.NMath.Stats,
CenterSpace.NMath.Analysis reflect that history. We have left namespace stubs so users
won't experience any breaking changes during library upgrades.
- We have dropped charting. The ecosystem is full of powerful visualization packages.
We have only three main data structures in NMath: vectors, matrices and data frames;
all of which can be easily visualized with different charting packages.
- Some of our optimizations use Microsoft Solver Foundation. If you use these, you'll need
be on the .NET Framework track and not on the .NET Core track.
- We have dropped the installers. The ubiquity and compelling ease of NuGet for our
users has made these obsolete.