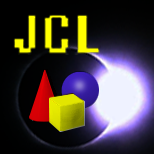 This includes, but is not limited to, this document and all source code and ancillary files. Source code files included in the JVCL have a header which explicitly states this (as is required) however, unless noted otherwise, all files including those without an MPL header, are subject to the MPL license.