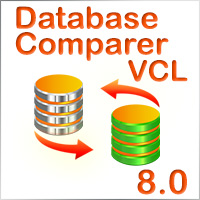 The Database Comparer VCL represents 100% Delphi VCL components for Borland Delphi / C++Builder. These components allow you to compare and synchronize SQL database objects and table records for many popular databases. You can view all the differences between databases and execute an automatically generated script to eliminate all or selected only differences. The library includes more than 25 components for Database development and its code is constantly being refined and improved. Delphi / C++Builder 5-7, 2005-2009, RAD Studio 2010, XE-XE8, RAD Studio 10 Seattle and RAD Studio 11 Alexandria support.

Database Comparer implements highly intelligent and robust synchronization algorithm. During first comparison step it takes Target database or Target SQL/DDL script and compare it to the Master database or Master SQL/DDL script trying to locate all structure differences and prepare final SQL script which will be applied to the Target and make its structure equal to Master structure.

Database Comparer also support batch mode so you can synchronize list of Target databases with given Master database or SQL/DDL script at one pass.

Features at a glance:

Connect to most popular databases

The Database Comparer VCL Version 8.0 represents the expansion of the previous version 7.2.

There are some changes in working with MSSQL and Firebird engines. The Table Data Comparer component was also improved.
New Features

RAD Studio 11 Alexandria support was introduced.
Connecting databases using Universal Data Access Components (UniDAC) was implemented.
The IBObjects connection support was added.
A new DB Comparer demo with the UniDAC connection was implemented.
The implemented GetDbcBuildNo function returns the current build number.
The Grant/Revoke privileges were implemented for IB/FB stored procedures and functions.
The "GRANT USAGE ON" statement support for Firebird 3.0 and higher was implemented.
The new DBExtract.ExtractObjects property allows defining the DB object types to extract.
Subroutines were excluded from comparing Firebird 3.0 and higher databases.
A new design-time menu was added to all DBComparer components, including the DBConnection components.

The Table Data Comparer didn't syncrhonize data with different key field names in the source and the target tables - fixed.
The FireDAC connection component was fixed: added necessary modules to the "uses" section, fixed problems with the "Variable length column [RDB $ FIELD_NAME] overflow".
The Database Comparer failed to analyze the Firebird CTE syntax, namely CTEs where the "WITH recursive" statement is used - fixed.
The DBComparer failed to parse the "merge into query" and the "extract (week from...)" statements - fixed.
The "Column unknown. FNC.RDB$OWNER_NAME" error when extracting Grants in Firebird 2.5 and earlier was fixed.

The cross-server support is not yet implemented when comparing and synchronizing the database structures.
The restricted support for some new features in the most recent versions of databases. And now we are working on it.