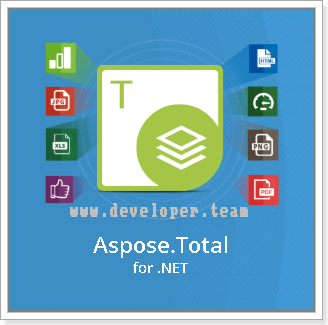 We compile all .NET APIs on a daily basis to ensure that it contains the most up to date versions of each of Aspose .NET APIs. If a new .NET API or a new version of existing APIs is released during the subscription period it will be included in .NET package and you are fully entitled to download and use it.

Aspose.Imaging for .NET
Aspose.Imaging for .NET is an imaging API to create, edit, draw or convert images within .NET applications. Developers can save the created or edited images to a variety of formats including PSD, TIFF, GIF, BMP, JPEG and PNG without the need of an Image Editor to be installed.

Aspose.3D for .NET
Aspose.3D for .NET is a feature-rich 3D API for .NET that empowers Mono and .NET applications including ASP.NET, Windows Forms and Web Services to connect with prevalent 3D document formats automatically without any 3D modeling and rendering software being installed on the server. It supports Discreet3DS, WavefrontOBJ, FBX, STL and Universal3D file formats where developers can easily create, read, convert, modify and control the substance of these 3D document formats using Aspose.3D API.

Aspose.CAD for .NET
Aspose.CAD for .NET allows developers to convert AutoCAD DWG and DXF files to PDF, JPG, PNG, BMP, TIFF and GIF image formats. It is a native API and does not require AutoCAD or any other software to be installed.