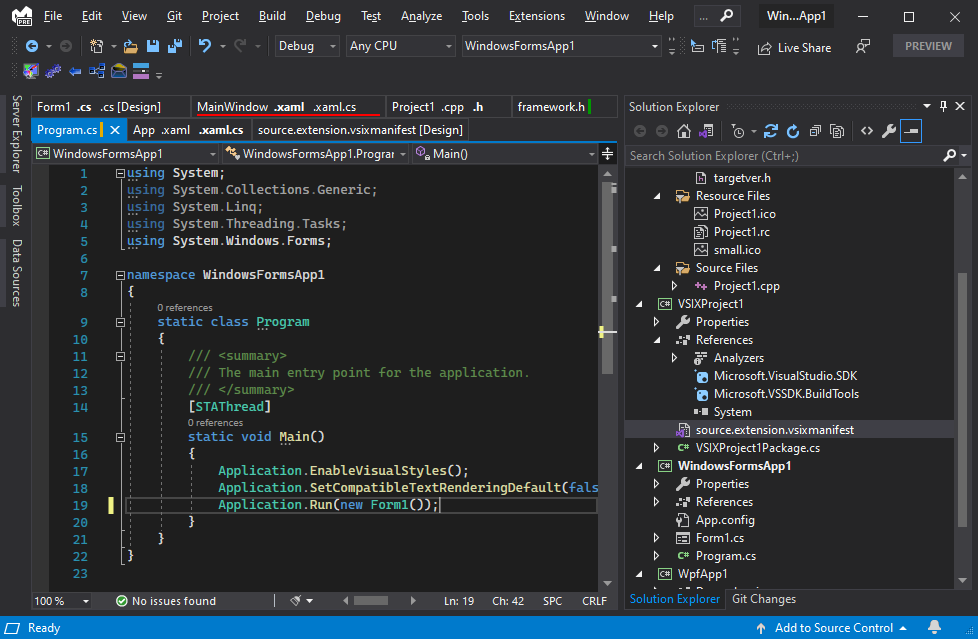 You love to write code, not scan the document well for a file name you need to switch to, and then scan the file menu drop-down list, and then resort to Solution Explorer or search. Only to repeat it a minute later when you need to switch to another document! And when you open two files with the same name there is now a game to guess the right tab from the two identically looking ones. Or maybe you recently edited a file and now don't remember its exact name - no help for you to reopen recently saved files, all tabs look the same now. Switching just between two open documents back and forth is not possible with a single keyboard shortcut and no additional windows!

You switch documents in Visual Studio hundreds of times a day and naturally want it to be a non-event, not a little quest breaking your flow again and again. The Tabs Studio extension completely replaces Visual Studio tabs and gives you precise control how to view open documents and navigate between them.

All open document tabs are always visible in Tabs Studio, in multiple rows if needed. There is no need for the file menu drop-down list, no need to manually pin tabs, the tabs keep stable order and ready for your commands:

Tabs Studio automatically groups together in an extended tab corresponding C++ source and header files, WPF markup and code-behind, ASP UI and code-behind, form code and designer, WCF service and code, and other open documents that differ only in the extension. It saves screen space, lets you quickly switch between corresponding files and conveniently organizes tabs:

It is possible to create custom corresponding file grouping rules. For example, if you use doc, ctl, and vm file name prefixes for documents, controls and view models, the following files docOrders.xaml, docOrders.xaml.vb, vmOrders.vb, ctlToolbar.xaml, ctlToolbar.xaml.vb and vmToolbar.vb can be grouped like this:

You can quickly open corresponding files from a tab context menu, with a keyboard shortcut, and set them to open automatically when you open one of the files.

Multiple sorting and grouping rules can automatically sort tabs by name, path, and group them by project, extension and other criteria. Super groups of tabs can be visually separated with a margin or even placed on separate rows, for example, each row for each project:

Tabs Studio v5.0.0 - July 1, 2021
Added support for Visual Studio 2022 Preview 1.1.
Moved support for Visual Studio 2015/2013/2012/2010 and SSMS 17/2016/2014/2012 to a separate installer TabsStudio2015.
Improved installer's ability to handle blocking processes.
Added the "Rename regex" option to the ITransform add-in.
Extended the Disambiguator add-in to compare full document paths when one level of disambiguation is not enough. Read more...
Fixed unpredictable ordering in the OrderEx add-in when there is more than 2 extensions in a group.
Fixed a rare TabsStudio.Tabs should not return PositiveInfinity exception.
Fixed a rare ArgumentException in WindowBase.get_Caption.