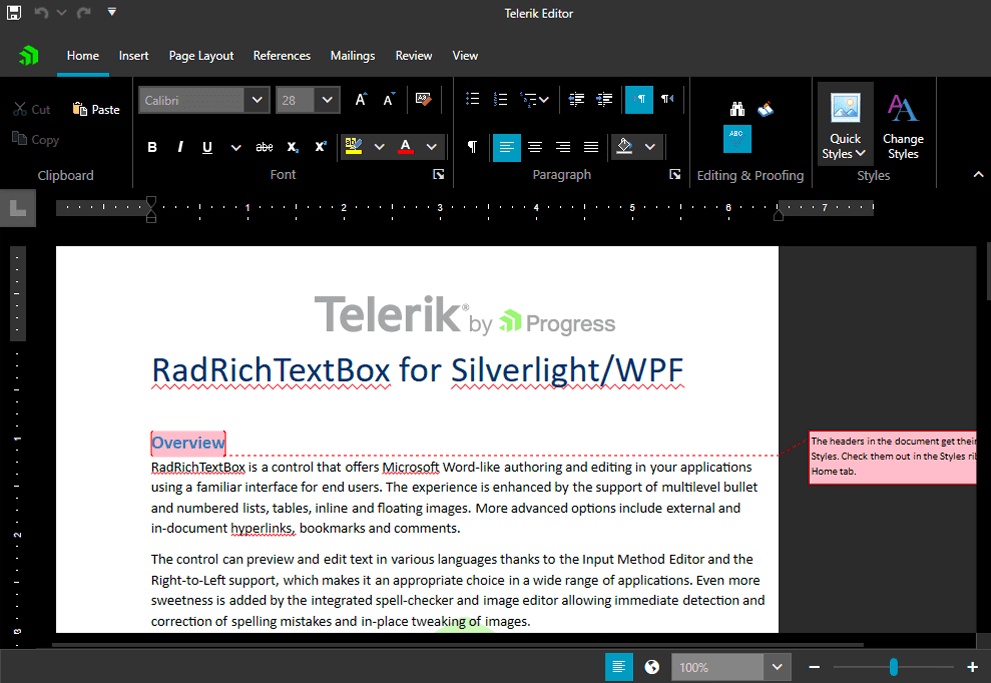 Added 'View All Properties' link into the Design Time Suggested Actions for all controls (support in Visual Studio 2022 and above).

Removed the design binaries from the WPF 4.0 and 4.5 folders in the NuGet packages.

Application hangs when Label placed in the DropDownContent is clicked.

Unified styling of RadSplitButtons when IsBackgroundVisible is set to false or IsEnabled to False in their IsChecked state for Green, Office2016, Office2016Touch, VisualStudio2019, and Office2019 themes. Unified styling of RadRadioButton and RadSplitButton when the IsChecked state is true and IsDisabled is false to be the same as RadToggleButton for VisualStudio2019 and Office2019 themes.

Updated weekly numbers in the RadCalendar to use FontWeight SemiBold in the Fluent theme.

The callout arrow is clipped in scenarios with ContentTemplate but with no Content set.

Setting a theme with StyleManager on a control level, instead on an application level results to some of the chat element not being properly themed - e.g., the scroll and the messages.

Introduced ColorSettingsPanelWidth property that controls the width of the color settings panel.

User can now select successfully the combo box items containing duplicate objects (for example equal strings).
The drop down opens in designer while typing/selecting text in the editor. Now will only open when selecting the control through Visual Studio designer.

A single or the first of multiple menu items fails to show an MS tooltip when the Fluent theme is applied.

Empty space remains at the top of the DataForm when CommandButtonsVisibility is set to None in the Office2013 theme.

TextShape with background and no Text created by TextTool cannot be selected or deleted.
Expanding the top parent of nested containers leads to rendering the last sub-container, even though its parent is collapsed.

The AutoHideArea is closing when clicking on a WinForms control that is placed in it.
Order of split containers and groups in the saved XML is wrong.
The ScrollViewer element is not removed when CanUserClose is set to False on a RadDocumentPane in the Office2019 theme.
Resizing an unpinned pane on a maximized window causes the pane to shrink in size.
DockingNavigator's scroll buttons get visible and hidden on scroll when there are just enough items to be shown in the viewport of the listbox.

A NullReferenceException in Telerik.Windows.Automation.Peers.GridViewRowAutomationPeer.GetChildrenCore() when using the search box in the dialogs.
Loading is slow when the InitialDirectory refers to the folder with thousands of folders and files.
Filtering does not work when the ExplorerControl is shown in an excel addin project.

Improved support for ICustomTypeProvider objects when using nested properties and indexers, e.g. Player.Name, Clubs[0].Players[GK].Name. The ICustomTypePovider interface is available in .NET 4.5 or higher.

An exception is thrown when using VirtualQueryableCollectionView with Entity Framework and grouping operations.
Adding column group in a separate UI thread causes an InvalidOperationException.
When selecting all items, grouping and then filtering, the SelectedItems collection is not updated correctly.
The selection overlaps the validation for the Windows8, Green, Office2016 and Office2016Touch themes when using the lightweight templates of the GridViewRow and it is in its invalid state.
Two Tabs are needed to focus either the filter text box or its successive match case button in the FilteringControl.
There is a 1px gap between the footer and the vertical scrollbar in the Office2016 and Office2016Touch themes.

Labels remain on the render surface after the ItemsSource is replaced dynamically and the row or column count is changed.

Slow performance when selecting / deselecting thousands of items.
Synchronize SelectedItem property of the RadListBox when bound to CollectionView and the control is placed inside DataTemplate.

Search text gets cleared when a ComboBox column is opened.

Entering a large value followed by a letter freezes the application.
Up and down buttons stayed pressed when touch is executed in a Popup that is positioned outside of the host Window.

Handle import of documents containing entries with duplicated object number in more than one subsection.

Memory leak in QueryableDataProvider caused by the generated classes in the PivotClassFactory.
All Sets appear in every dimension.

Filter options are no longer shown for OLAP group descriptions which do not support filtering.

RibbonWindow content is offset when the taskbar is hiding automatically on Windows 10.
All RadMenuItems inside the Quick Access Toolbar dropdown button's menu are highlighted when using keyboard to navigate between them.
A border above the ribbon is displayed when the backstage is open and the control is hosted in a RibbonWindow and the Office2016 / Office2016 touch theme is used.
There is a gap between the application menu and the ribbon when its parent window is maximized and the menu is open in the Office2016 theme.

InsertHyperlinkDialog adds automatically http:// in front of any link not containing http/https.
Moving the keyboard focus around RichTextBox raises new GotFocus/LostFocus events despite the fact that the control is already focused.
Hyperlinks are not exported properly if http:// was not added to the address when they were created.
An InvalidOperationException is thrown during the layout of a table cell with a floating image.
A KeyNotFoundException is thrown when loading an RTF file with missing fonts.
Setting IsPrimary at run-time does not affect the visibility of styles.
DocumentPosition's finalizer implementation causes excessive memory traffic.

All day appointments in agenda view will now display the text All day when the appointment is marked as having a whole day duration.
When you set ShowWeekGroupHeaders to WeekViewDefinition, a double border appears in Office Black/Blue/Silver, Summer, Vista, Transparent, Expression Dark.

Exposed the LayoutTokenizer class. This class enables you to easily separate text into words so they can be later spellchecked. This could be useful if you need to implement spell checking for custom control.

The WorkbookContentChanged event is invoked right after importing a document.
Auto fitting column width with cells containing wrapped text with many words leads to a wrong result.
The style gallery appears empty (the Style and Template were missing) when any of the Green, Office 2016, Office 2016 Touch, Material, Fluent, Crystal, Visual Studio 2019, or Office 2019 themes are used. The latter also throws an exception for the missing ListBoxStyle.
Add sheet button is hidden when there are many sheets.
Formulas referring to cells containing cell references are not recalculated if the imported document contains cached formula values.
NullReferenceException is thrown when importing a document containing a destination that does not refer to a formula.
Exporting documents containing images with a large offset from the anchor cell results in stretched images in Excel.
A NullReferenceException is thrown when dragging a sheet in plugin architecture.
Importing a document containing a total hours number format causes an ArgumentException.
The outline properties of the chart series are not respected by most charts.
Printing through print preview with more than one copy causes many copies to be printed.
The ApplicationButtonContent is hard-coded (cannot be overridden) and has a white foreground for all themes.

A NullReferenceException is thrown when using LineHighlightTagger.

Improved the resizing behavior when RadWindowInteropHelper.AllowTransparency attached property is set to False. The RadWindowInteropHelper.ClipMaskCornerRadius is set to new CornerRadius() for themes Crystal, Fluent, Green, Material, Office2016, Office2019, VisualStudio2019, Windows8. In order to get the best performance for other themes, the property should be set manually.

Application hangs when the control is zoomed-in to a very deep level and then zoomed-out in a scenario with a big period range.
An ItemTemplateSelector set to RadTimeline inside a DataTemplate was ignored.

RadToolTip does not open when WPF UserControl is hosted in foreign app via plugin architecture.

Improved the resizing behavior when RadWindowInteropHelper.AllowTransparency attached property is set to False. The RadWindowInteropHelper.ClipMaskCornerRadius is set to new CornerRadius() for themes Crystal, Fluent, Green, Material, Office2016, Office2019, VisualStudio2019, Windows8. In order to get the best performance for other themes, the property should be set manually.

Text is not replaced when the document contains empty fields.
Unexpected behavior when replacing a string within a run that is not the first element in the paragraph.
Wrong import of the border local attribute of Html tables.
Forecolor of table cells text is not preserved when exporting to PDF.
Table properties are not preserved when replacing text with table.
An ArgumentNullException is thrown when importing HTML with empty col elements without attributes.
DocxFormatProvider: A NullReferenceException is thrown when exporting an abstract list with character properties.