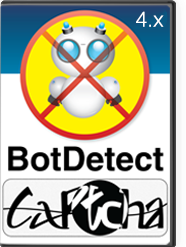 BotDetect™ CAPTCHA generator is a non-stalking form-security solution that uses a mix of measures, that are easy for humans but hard for bots, to prevent automated form posting.

Why BotDetect?
BotDetect Captcha vs. ReCaptcha
The years of Google’s relentless abuses of their organic and paid search monopolies, and the years of their equally relentless campaign of disinformation and FUD about captchas, took a toll among our former competitors -- there are only two viable players left. Ladies and gentleman, this is 'BotDetect Captcha' vs. 'Recaptcha the Stalker' fight. Please take your seats.

What Google confirmed so far:
2.5 years after we stuck the 'the Stalker' label on it, a Google spokesman confirmed -- if you have a Google Account, Recaptcha has been stalking you for all those years.
The tip of the iceberg! Grab some popcorn folks -- there will be more shoes to drop :)

What Google didn't confirm yet:
Transport-layer stalking -- independent of a Google Account status, or the existence of an account, or your grandma's cookies.
Protocol audits by independent researches found built-in stalking capabilities in QUIC, TLS v1.3 & 1.2, and TLS Channel IDs.
The Hamburg Uni guys audited the former three protocols. Combining them with the Trio that just broke through the Recaptcha's 'tracking mouse movements' obfuscation layer might bring some interesting results.
But, somehow, they will have to make sure that the Stalker is not aware that it is being tested -- what is easier said than done!
The more in-depth coverage of this topic has its own chapter further down the page.
Antitrust violations -- including, but not limited to, burying this site on Google Search -- over the last six years, at least.
Check for yourself! On your desktop, open an incognito mode browser window and try finding us with the single-keyword 'captcha' search. Do it -- it will explain many things!
The EU's Margrethe Vestager, who fined Google $2.7B over a similar issue, said that competitors were typically on page four.
As we're more often on page 14 rather than 4, perhaps we are getting VIP treatment :)
This is increasingly counter-productive for Google -- making one wonder aloud if there is an entity, other than Google, that holds a part of the Google Search dials?
Which brings us to:
The role of the NSA & its vicarious fronts; aka, 'Recaptcha marketing department.'
We explore different aspects of this in a few chapters at the bottom half of the page -- and we're not even close to being done yet!
Do not hold your breath over this particular bullet being officially confirmed, ever! There are laws forbidding such kind of disclosure.
But, a Googleminion might blab again :)

Intro: Recaptcha Versions
At present, the Stalker exists in the following three variants:

Invisible Recaptcha (v2) -- the Invisible Stalker -- whose release Google kinda regretted.
That gradual disappearance of the word 'Invisible' from its homepage was fun to watch :).
Recaptcha (v3) -- released after Google spent about 20 months applying lipstick on the Invisible Stalker pig -- hoping no one will notice that the pig with lipstick is still a pig :).
Nocaptcha/Checkbox Recaptcha (v2) -- the original Stalker. It appeared, for a while, as if it was being taken behind the shed -- but no gunshot was ever heard. It seems that Google had a change of heart and decided to keep it -- likely following the Invisible Stalker fiasco.
The presence of multiple versions makes maintenance of this article more difficult than it should be; but you will figure it out. It is the same stalker after all -- just dressed in three different outfits.