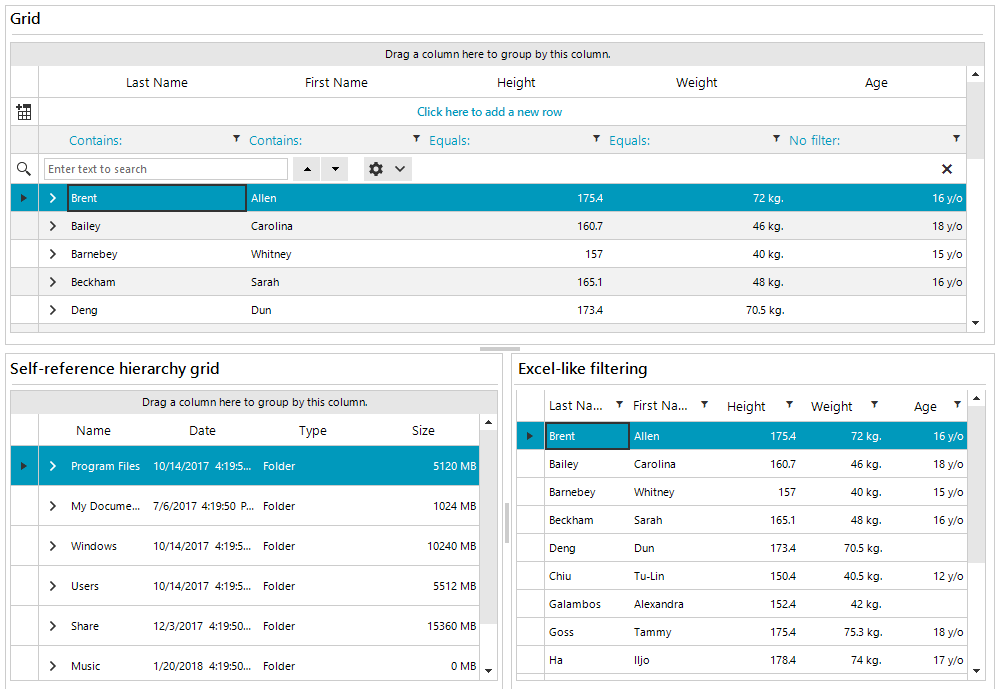 Telerik UI for WinForms includes more than 90 user interface controls you can use to fulfill the most demanding desktop or tablet application requirements. All-way customizable GridView, Form, Chart, Scheduler, RichTextBox and other essential controls enable you to build any Line of Business or Modern application in less time while staying under budget.

All Telerik Windows Forms controls come with full theme support. You can use any of the 19 included themes (Windows 8, Office 2013, Visual Studio 2012), or build new ones with the intuitive and unique Visual Style Builder tool. The built-in themes help you effortlessly deliver sleek and consistent, next-generation user experiences across your desktop and tablet applications.

Despite having animations and rich visual effects, Telerik UI for WinForms controls feature excellent performance aimed at helping developers like you improve your productivity and deliver better and faster applications in less time.
UI for WinForms enables easy development of complex, high-performing apps by:

RadControls inside a UserControl added at design time are scaled twice.
Controls are not scaled properly at 150% DPI after upgrading.
Minimum/MaximumSize are lost when going to HDPI screen.

Drop row line is not rendered when you drop on another grid.

Expanding the top group row when paging is enabled jumps to a previous page.
ComboBox Column DataSource property is not visible in the Designer when the previously selected node was RadGridView.
Change Template names when creating the Templates in the Property Builder.
InvalidOperationException is thrown when a row is expanded and the AutoSize property is true.

ImageSaved event is not fired when the user uses the save button.

In .NET 6 an ArgumentOutOfRangeException is thrown when using Cache Provider and we have one file in the folder.

Use the named sets metadata to place them in a correctly named folder.

Removing a ribbon tab in design-time will not delete all the child objects.

A problem in resizing split panels in design time in Net5.

Visual Studio crashes if you attempt to open the designer with a serialized ControlPanelHeight property.

When AssociatedControl is set to Form, the title bar is duplicated.

Find and replace dialog does not set focus on Text to Find textbox.
EMF images cannot be visualized when importing from HTML.
The layout hangs when importing HTML with nested tables and setting the padding of all cells.
The paste options popup stays visible when the control is hidden.
The scrollbars flicker with a particular size of the form.

Header button is partially blocked when the header text is too long.

User is not allowed to delete text hitting backspace in .NET6.

Disable Replace Function in RadSyntaxEditor when it is read-only.

Renaming a BindingNavigator and dropping another breaks the designer.

SplitterWidth value is saved scaled during SaveToXml on high DPI.

Unnecessary installation of the System.ValueTuple assembly in the GAC.

When the button is disabled the back color remains the same as in the pressed state.

The control dragged from the toolbox is not high enough in .NET Core.

When an example is opened the ListControl with themes must be auto-sized and not show a scroll bar.

Implemented a setting that allows choosing if the fonts should be embedded in the document.
Provided support for inserting transparent images in Net Standard.

ArgumentException is thrown when importing an XLSX document with a comment (Note) without an author.
An exception is thrown when converting to PDF and there are cells with a width less than 5.
Conditional Formatting is exported for the active sheet only.
When a document with consecutive dfsx-es is imported, an ArgumentOutOfRangeException may be thrown.