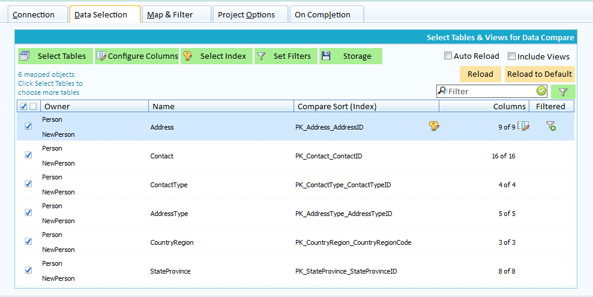 Show Compare
Group Projects
You can assign each project to a project groups making organizing your projects easier. You can place all your data compare projects into a data group. Place a specific server group of projects under one group.

Schema Compare
Straight Forward Compare
Comparing two databases is quick and easy. In a new project select your source database target then your target database and click to run your schema compare.

SQL Delta shows an overview of all the objects that are different or not in either the source or target. By selecting each object you can see at the schema level the various differences.

Show Compare
Comprehensive Project Options
Each schema compare project has a range of options to reduce discovery common differences. For example objects constraints with system names are usually different between source and target and these can be ignored.

SQL Delta can then optionally automatically change the definitions to use the correct schema name. For example your source database uses "dbo" and your target uses "prod" as the schema name for all objects. Simply map dbo to prod and any script changes will ensure the target object is prod.object instead of dbo.object.

Comprehensive Search and Filtering
Within the compare results the objects can be filtered based on a range of options. For example hide all objects that are the same is a frequent filter.

Filters can be persisted so whenever you re-run the project the filter is re-applied. This persistence can also be used to preselect or pre-deselect objects which is handy if you have objects in your source that should not be sent to target.

Filter Schema Load
You can apply a filter to the schema load to exclude objects from loading. For example you could have a set of functions that are part of your source database that are never part of your target database. By adding the load filter you can exclude these functions from the load and therefore the compare.

Two Click Synchronize
Once the schema compare tab is shown simply click Script to generate the deployment script and then click Execute to apply to the target.

Report on Compare
SQL Delta can generate an HTML report of the schema compare highlighting the object differences throughout the schema.

Show Compare
Modify Script Before Deployment
Sometimes it's nice to be able to change the script or add script to the final deployment script. The synchronize script is completely editable plus within project options you can add custom script that is added to the sync script for each deployment.