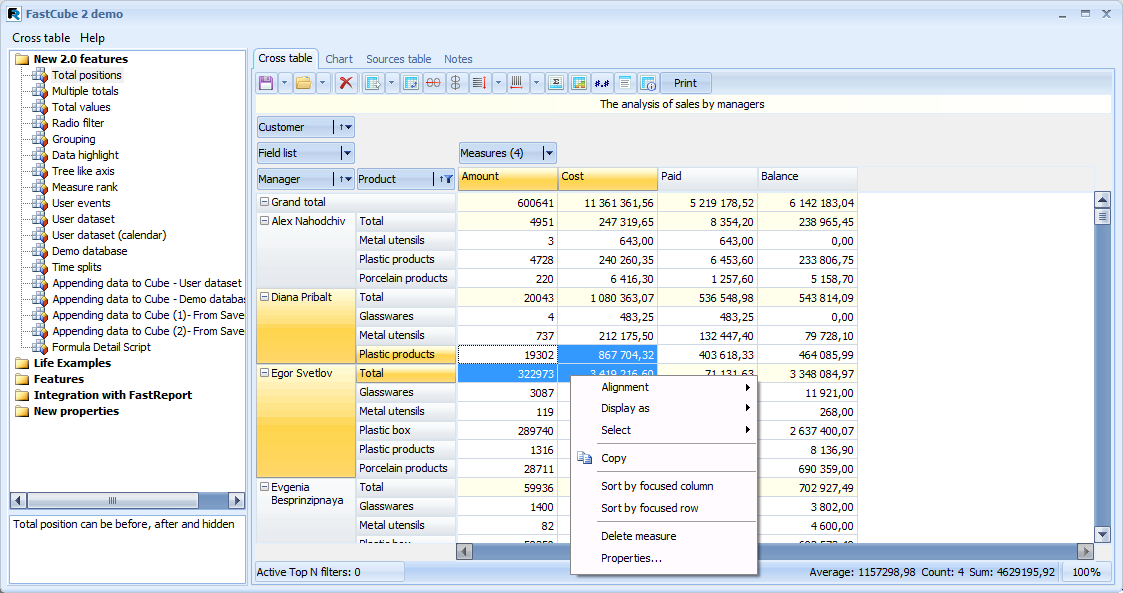 FastCube components can be built into the interface of host applications
FastCube end users do not require high programming skills to build reports
FastCube is a set of OLAP Desktop components for Delphi/C++Builder/Lazarus
Connection to data-bases can be not only through the standard ADO or BDE components but also through any component based on TDataSet
Instant downloading and handling of data arrays
Ready-made templates can be built for summary tables. It is posible to prohibit users from modifying the schema
All FastCube's settings may be accessed both programmatically and by the end user
FastCube's data can be saved in a compact format for data exchange and data storage

Key features:
Instant data slice creation. Data sources schemas or SQL queries
All basic statistical operations (count, sum, minimum, maximum, average, variance, etc.)
Special functions (number of unique values, first value, list of unique values)
Filters for measured values
Automatic component layout of date and time
Unlimited number of measures in a summary table
Possible to put data into table columns or table rows, as well as on any level of measurements
Calculated data (based on FastScript)
Calculated filters for numeric data by using output formatting
Calculated filters for values when calculating data (based on FastScript)
Numeric data display control by using output formatting
Numeric data output as a value or as percent (in a row, column, group or table total)
Possible to use data of Date, Time and Row type
Conditional highlighting of cell value in a slices (in a range)
Possible to minimize measurements as a whole as well as separate values
Possible to control the display of totals
Control of axis sorting (according to measurement value or data)
Control of each level of measurement sorting (line of sorting)
Saving of templates (schemas) and data itself for future use
Export of FastCube's slices to Excel, Word or HTML
Copying of a highlighted range to the clipboard
Reviewing and exporting slices cell details
Cube's/data cube's export to XML formats : XML for Analysis, xml-msdata, ms rowset or DataPacket
Printing by means of FastReport
Graph construction by means of TeeChart

I. Grids
1. Improvements to source data grid
This screenshot shows that the cube grid has a title zone and active row marker and also supports resizing and cell selection for clipboard operations.

2. Closer to the native look of Windows with enabled themes
This screenshot shows the improved appearance of the grid. Note that dropdowns are now consistent with other Windows controls.

3. Gradient drawing
It is now possible to use a variety of gradient fills, as well as solid fills, for various parts of the grid.

II. Data analysis
1. Optimized axis operations
Grid transposition is now instant – it does not require data recalculation (required in FastCube1)
Movement of Measures between axes and within an axis is now instant – it does not require recalculation (required in FastCube1)
Filtering does not reset the state of collapsed nodes
2. New dimension attribute for single choice (radio filter)
It is now possible to set up a dimension having a single value, if required. This screenshot shows how it appears in the grid.

3. Groups
FastCube2 can now merge the dimension items into groups. For example you can place the first two years in one group and the next two in another group. This is how it appears in the dropdown:

4. Totals
Totals have many new features. This screenshot shows some of them.

One measure can have more than one total
Each total has a position attribute which allows it to be placed either before items, after items or nowhere
Total can have its own aggregate function which differs from the measure aggregate function
Grand total can be collapsed (it collapses the whole axis)

6. Tree-like axis
The grid can now represent axes in a more compact form, as in this screenshot.

It is now possible to highlight any cell dependent on its value, in addition to the existing conditional highlighting of cells (which itself has also been improved).

8. Status panel
FastCube2 grid has a status panel which shows aggregates for a selected region.

10. Export
FastCube2 comes with built-in support for exporting both slice and cube data to these data formats: XLS, HTML, DBF (cube data only), ODT and XML.

- Split date and time fields into their component parts (day, month, minute, …). The parts required can be specified before the data load. Moreover, parts can be added or removed even after the data load

- References: additional fields can be loaded from reference tables based on a key field

- Custom split: a custom field can be created, based on any other field, and can be loaded in the code, using values from the base field.

2. Loading from custom storage
There is a new component, similar to the FastReport user dataset, which allows data loading from sources other than TDataSet. Field descriptions need to be written and also handlers for traversing the data store and retrieving the data.

Change split parts for date and time fields (see above)

V. More to come
Other features that will be implemented in future FastCube2.x versions include: hierarchical dimensions, top-N, vertical text output, export to more data formats … and more.