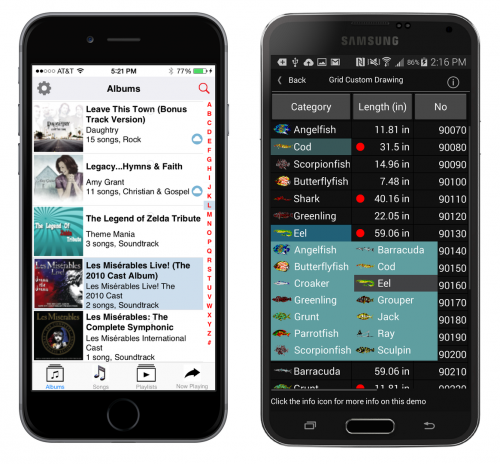 Have you started using RAD Studio's FireMonkey library yet? It has tremendous advantages as you can build one app that runs on all your devices: your iPhones and iPads, your Android phones and tablets, and your MacBooks and Windows computers. But will you be as productive with FireMonkey as you have been with the VCL? Will the performance of your applications measure up to the VCL when moving to FireMonkey? Can you develop without having to compromise on the look and feel of your application? You may have thought the answer was a resounding "No". But with FirePower and RAD Studio, the complexity of having one app is greatly simplified. You'll be amazed how quickly you can develop without compromising on performance and capabilities. Not only will your user interface be intuitive and fast for each platform, it will be so much more effortless and enjoyable to develop. Here's what some of our customers are saying.

What components come with FirePower?
FirePower comes with the most critical components for building professional desktop and mobile user-interfaces with Delphi FireMonkey. Central to our component suite design for FireMonkey are two powerful and flexible data-aware grids, list boxes, transition record viewers, and a complement of many high-end editors, combos, and lookup and filtering components. Its capabilities are too numerous to mention here, but you can see a detailed overview of FirePower components here.вЂ‹

Rapidly build powerful business applications
The FirePower component suite includes the critical and necessary user interface components for building professional
desktop and mobile applications using RAD Studio. In particular those who are building business applications will directly
benefit as the controls display your data quickly and in a natural way. FirePower is built from the ground up so that your
efficiency, look and feel, and power are not compromised when moving your applications to the mobile space.

No compromise when moving to the mobile space
Central to our component suite design are two powerful and flexible grid controls. Our FirePower grid components are
designed to be incredibly fast, efficient, powerful, and flexible. They are designed to perform well on desktops, but take gre at
advantage of the mobile interface, giving the end-user a natural experience in style, performance, and ease of use.

Suite of versatile user-interface components
Also in FirePower is the TwwRecordViewPanel component giving you a flexible layout component specifically to edit a
record. The component dynamically creates an editable panel based on your dataset's field properties. It r emoves the tedious
job of building custom record editing forms, and lets you focus on which fields you want edited and in what order.
There are also an array of edit and input controls included with FirePower that will significantly enhance your application, as
well as components to assist your end-users in filtering and searching for data.

Prebuilt applications that use FirePower that you can run right now on your own devices:
Android Demo of FirePower: To install and run the FirePower main demo for Android, go to the Google Play Store and use
the keyword InfoPower. Then from your Android device click on the install button. If you wish to see t he source for this
demo, see the \Users\Public\Public Documents\FirePower\6.0\rs10\demos\MainDemo directory from your computer that you
installed FirePower onto.
We strongly recommend you compile and run the included iOS demo, PlayMusic, n the directory
users\public\documents\FirePower\6.0\rx10\demos. This will show you the capabilities of the LayoutGrid.

1. FirePower's Masterpiece Grid
Central to our component suite design for FireMonkey is our greatly enhanced data-aware grid which is complemented with a
library of other components. Our FirePower grid component is mobile optimized as it is designed to be incredibly responsive
and natural for the end-user, and powerful and flexible for the developer. Here are some of the capabilities of this grid.
Embed custom controls such as buttons, combos, imagecombos, checkboxes, switches, lookupcombos, datepickers, and
images into the grid. Absolutely no coding required for this. Also you can dynamically determine when custom controls
are displayed based on the value of data for that record.
Performance: Data is buffered so that the grid only loads records that it needs to display. This allows for fa st grid
display that is not crippled by the number of records or columns in the dataset. In fact, our FMX grid rivals in
performance to our super-fast VCL grid.
Smooth scrolling The mobile space relies upon touch, acceleration, and momentum for scrolling. The DataGrid
implements smooth scrolling using all of these factors giving your mobile apps a natural responsive experience.
Clickable column headers with built-in support for sorting (ascending or descending). The buttons for the column
headers are automatically painted in the native style.
MultiSelect support: Allows you to select multiple records with a checkbox or a switch in the grid and operate on them
as a whole
In-memory support - Use with in-memory datasets such as the TClientDataSet to have a grid display data independent
of any physical file.
Fixed column support, including editable fixed columns.
Export Data : Methods to export or email your grids data to various formats for use with other applications for both the
desktop and mobile platforms. Can be used in conjunction with filtering so that only certain records are exported.
Codeless Validation constraints: Supports InfoPowers robust validation languages for enforcing data constraints. The
developer can use either picture validation masks or regular expression validation masks. See section 3 below for more
information on the validation languages.
Flexible design time columns editor: Our columns designer is significantly enhanced over our VCL counterpart and
you'll be able to accomplish even more tasks without any coding.
Integrate styles seamlessly with no effort on your part. Just change the style and the grid recognizes the changes. You
can still override the grids fonts and colors when needed. You can even change your whole app look to a windows 10
style without any coding. In addition when using touch screen Windows 10 devices, the grids and embedded controls are
also touch enabled.

The TwwLayoutGrid, which allows you to visually design the layout of your grid by dropping in embedded controls into a
panel that at runtime are repeated vertically, horizontally, or multi-dimensionally. This is particularly useful for the mobile
space where a more open layout allows the developer to express the user-interface more intuitively. It also allows you to
represent your data naturally so that your limited mobile screen real-estate is not consumed. The standard vertical grid may
not always be the ideal interface for multi-record display. Also includes touch support, automatic editing, and numerous
smart events that will allow you limitless expressions of your application.

Blazingly Fast!! - You will be impressed by the outstanding performance of this component, whether on the desktop or
mobile space. Your end-users will love the natural usability and intuitiveness of your applications when using this
component.

RAD Development: We strongly recommend you compile and run the included iOS demo, PlayMusic, in the directory
users\public\documents\FirePower\6.0\rx10\demos. This will also show you the capabilities of this grid in a complete and
sophisticated application. The MainDemo also includes numerous other examples including the forms displayed above. You
can do so much without any coding, yet the flexibility of the controls does not compromise your power.

TwwImageControl did not support filenames that were in numeric format. Previously if the binder value was a number it assumed it represented an image index, and not a filename. Now if the Images imageList is unassigned it assumes it is still a filename

TwwComboEdit - The ItemIndex was not properly updated in some cases

Add TwwManager.Grid.DiscardChangesMessage property which is the message that the grid shows when cancelling changes (User escape key)

TwwLookupComboEdit's ListBox and TwwDataGrid- Cleaned up logic so mouse wheel scrolls view instead of simply moving the record position. This allows for a more smooth and instinctive feel to the user. To return to the old behavior, you can set the new property PaintOptions.MouseWheelScrollsRecord to false for the grid or DropDownGrid. For the dropdown list the vertical scroll bar up/down buttons will now scroll always instead of just when PaintOptions.LoadAllRecords is true.

TwwLookupComboEdit - In some cases the highlighted record in the dropdown list would disappear when moving through the list. The active record could also jump to the middle sometime when scrolling. This problem is fixed.

TwwLookupComboEdit and TwwCalendarEdit when attached to a time field: When embedded in the TwwDataGrid, the edit portion remained highlighted causing a confusing cell highlight with an inner selected text highlight. This problem is fixed.

TwwLookupComboEdit's dropdown height and width were not large enough when the scaling of the user's window setting was set to precisely at 125%. This was noticed when running in windows. This problem is fixed.

TwwLookupComboEdit - Cleaned up code in closeup to free created resources. This is avoid OSX64 random access violations when repeatedly dropping down the list.