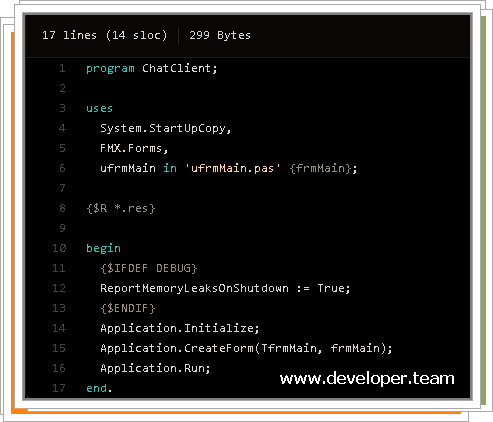 This set of components is the fastest possible implementation of socket communications, in any language; this is an extremely optimised code on TCP/IP sockets. Forget using a thread per connection: With this suite you can have as many concurrent connections to your server as you like. Threads are used per request and not per connection, and are maintained in a very fast thread pool class.

On top of the TCP/IP sockets, a lightweight protocol is implemented to be able to pack and unpack buffers (simple TCP/IP is streaming and has no notion of a well defined buffer). The set of components implementing this functionality is TncServerSource and TncClientSource. Both of these components implement an ExecCommand (aCmd, aData) which triggers an OnHandleCommand event on the other side (a client can ExecCommand to a server, or a server can ExecCommand to any client). ExecCommand can be blocking or non-blocking (async) depending on how you set its aRequiresResult parameter. If you use the blocking behaviour, the component still handles incoming requests from its peer(s). For example, a ClientSource could be waiting on an ExecCommand to the server, but while waiting it can serve ExecCommand requests from the server!

This set of components promises unrivalled speed and that is not just in words:

A simple timing test with the NetComVSIndy demo gives the following results:

Testing Indy... Time taken: 32468 msec
Testing NetCom... Time taken: 25109 msec
Starting with the base unit, ncSockets.pas, you will see that the implementation does not suffer from slack code, it is rather immediate. The inline calling convention has been used wherever deemed appropriate. The very core functions have been tested and optimised by monitoring the performance via timing of large loops and assembly inspection to squeeze out every last bit of performance.

The biggest difference though in speed gain is due to the architecture. Unlike most typical sockets:

this set of sockets does neither spawn nor use a thread per connection.

This means you can have as many live connections as you like and you will see NO difference in performance! A thread pool just waits for any requests; if a thread was to be created per request or per connection, the speed would suffer a lot, as creating a thread is quite heavy time-wise. If the number of requests per second cannot be handled by the thread pool, the thread pool grows up to a maximum defined size, and if it still cannot cope, the client just waits until the server gets a ready thread to process its request.

Particular attention has been given to connection issues also. For example, the disconnects are picked up immediately, and if a line is so bad that the disconnect cannot be picked up, it tackles this by a keep alive packet by which it gets to know the actual status. There is a Reconnect property and a KeepAlive property. When a client gets disconnected, for whatever reason, it tries to reconnect transparently and without affecting the main application's performance. This way you do not have to worry about keeping your clients connected.

Compression and encryption are also standard with these components with no extra libraries required. Ofcourse you can use your own compression or encryption if you prefer, but it is rather handy to have just a property you can set on the component.

This set of components can also deal with garbage data thrown at them, they have been used and tested in huge, country-wide projects where all sorts of attacks can be seen.

Written by Bill Anastasios Demos. Special thanks to Daniel Mauric, Tommi Prami, Roland Bengtsson for the extensive testing and suggestions. Thank you so much!