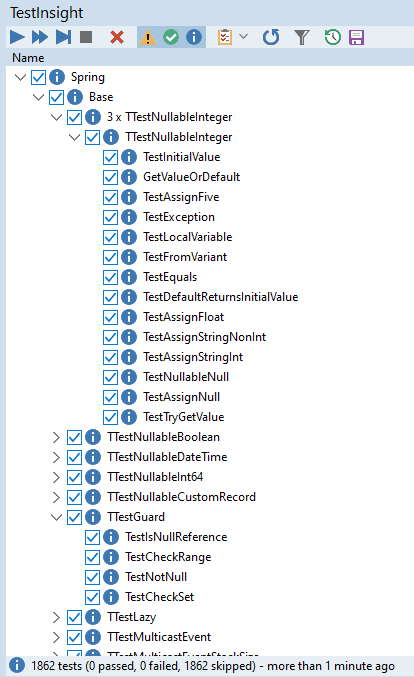 Here is how it looks in TestInsight in the "by fixtures" view - remember you can toggle between the "by type" view and this one at any time just by clicking that notepad icon. TestInsight supports Delphi XE up to 10.4.2 - always the latest update on each major version.

Not only does it look nicer than the old DUnit GUI, but it also executes the tests way faster and allows you to directly navigate to the source of any of your tests with a simple double click on them, now even if you inherited that test from a base class - you will always end up in the correct method. And all that directly from within the IDE as you know it.

Wagner also implemented support for running DUnit tests with TestInsight on pas2js - I wonder why that might be... 😏

We also improved the way tests are selected when a DUnit project runs - it now simply iterates the entire tree of tests and marks those that you selected in the IDE to then just let them run instead of relying on the ShouldRun method from the listener interface which also made it possible to properly use test decorators without them being run even if there were no tests selected for them.

The new view is not only supported for DUnit though but also for DUnitX and DUnit2.

By the way - please remember: the "fast forward" icon has two functions. When no tests are selected it runs a "discover" which means doing a quick project run but just collect which tests are there without executing them. If any tests have a checkbox, then it executes just those but still collects all other tests inside the project. And via the context menu, you can quickly run the currently focused test or the entire branch without changing any checkboxes.

Finally! Thanks to Wagner Landgraf who implemented this feature you can now enjoy the hierarchical view of your unit tests just like you know it from the good ol' DUnit GUI.