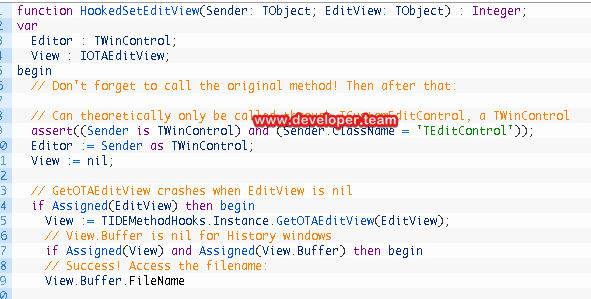 The first part of this series examined an area not exposed by the Open Tools API (Delphi’s plugin API): integrating with the code editor. Yet several plugins, such as CnPack, Castalia, and two of my own soon-to-be-released plugins (Bookmarks and a Mystery Plugin), integrate into the code editor painting along with the code. How do they do it? The answer is by hooking a number of IDE methods at runtime, and the first article showed how to do this with one method, TCustomEditControl.PaintLine, and ended painting some text on the top left of the editor.

Integrating with line numbers, folded code, and paint coordinates for a line, in order to know exactly what is onscreen in the code editor and where it is, and accurately paint your own additions to it
How to coexist with other plugins that also paint in the code editor
This articles assumes you have read the first; are familiar with the concept of code hooking; and are familiar with function pointers to OO methods and can convert between OO and non-OO prototypes of the same method (ie with an explicit Self parameter you pass in order to call an OO method, procedural-style.)

Code editor integration
Once you have a plugin that can paint on the code editor – see Part 1 – you need a number of other things:

To know which file the code editor is displaying
To know the line number that is being painted in your hooked paint event
To account for folded code in the above, ie to know which lines are visible onscreen and which aren’t, and if a line is visible as normal, is hidden, or is a folded line (has the + symbol indicating it can be expanded)
Miscellaneous things, like getting a point onscreen in pixel coordinates for a line / column pair
Which file is being displayed?
The TCustomEditControl.PaintLine method has a number of parameters, including Self (the edit control) and others. Yet none of these directly indicate which file is in the editor being painted.

To do this we need to hook another TCustomEditControl method: SetEditView.

A brief overview of the edit control’s architecture: the IDE has (usually) only one edit control visible onscreen. It is docked in the center of the IDE. Others occasionally appear – you can open a file in a second window and in the Options dialog one can be hosted – but that’s outside the scope of normal IDE usage for this article. The tabs at the top of the editor change the file that’s being displayed. The tabs do not change which TCustomEditControl is visible onscreen. There is only one, and instead the contents of what it displays are changed, via a view.

A view represents the file, its contents, and metadata about it required for display. Much of this same information is available in the OTAPI via OTAEditView, which represents a view, and which we’ll get to in a moment.

In order to track which file is being displayed onscreen, we need to hook SetEditView. The code will then remember which view was the last set for any specific edit control. Then, when painting a control, you can look up information about the view, such as the filename of what’s being displayed inside the view.

I’ll assume you know how to hook a method, given the mangled method name and a method prototype. (See the first article for details.) Please note that at the end of this article I discuss the best hooking method to use – it’s not the one used in the first article – and some caveats about how to use it. Please make sure you read that section.