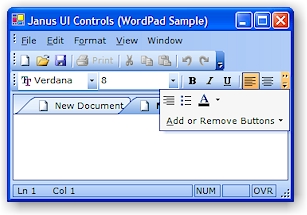 The new Janus UI Controls for Microsoft .NET is a comprehensive toolkit of user interface controls designed to provide a modern look to Microsoft .NET Windows Forms applications. The Janus UICommandManager component provides the means to easily create Windows Forms applications using a command-based architecture with advanced customization for dockable menus and toolbars. The control has several built-in VisualStyles capable of provide your applications with a look similar to Office 2000, Office XP, Office 2003 or Windows XP.

Also part of Janus UI controls is the Janus UIPanelManager component which permits you to deliver applications featuring advanced docking panes that mimics those found in MS Outlook 2003 or MS Visual Studio. By using this component developers can easily create SDI or MDI tabbed windows with auto hide and floating functionality that permits a better use of the application workspace.

Part of Janus UI Controls are the Janus ExplorerBar control featuring the look of Windows XP Taskbars which permits you to customize groups of links using icons, colors, and watermark images and the Janus ButtonBar control with support for small and large icons for groups and can be shown in vertical or horizontal alignment.

Both controls offer many advanced formatting features that will give the programmer total control over the appearance like support for Background pictures, Gradients, Blend colors and Transparency (Alpha Blending).

Groups in Janus ButtonBar and ExplorerBar Controls for .NET can be set as containers to hold whatever UI elements you like in them and

The controls provide methods to preserve user changes to the layout.