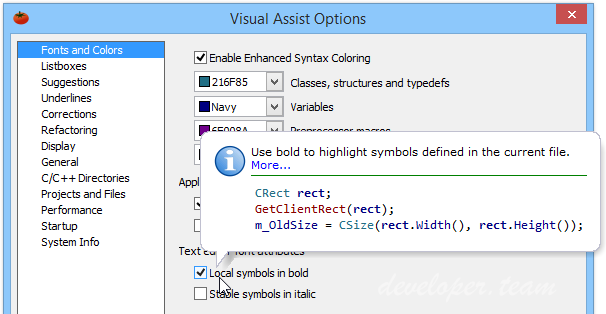 Language Support
Most features of Visual Assist X work in all Microsoft IDEs and all programming languages. Several features are available only for specific languages, typically because they do not apply in some languages. A few features implemented for Microsoft Visual C++ 6.0 are already part of Microsoft Visual Studio 2005 and .NET.

Other uses of a VA Hashtag can be found with Goto (Alt+G) and Goto Related (Shift+Alt+G).

General Release Build 2353
Major Code Inspection update.
Under the hood the latest Clang technology has been incorporated, expanding our potential as we keep pace with the latest developments.

Code Inspections can now be selectively disabled in sections of your code using comments. If you don't want to change a section of code, you can choose to not be alerted of potential improvements without disabling checkers globally.

The "virtual" keyword can now be omitted when implementing virtual methods. Many developers choose to omit the virtual keyword, and now Visual Assist can too.

C# completion and suggestion listboxes have returned! Enable in the options dialog, under Suggestions.

New UI allows fine grained control of the resources Visual Assist will use when parsing. Reduce the impact of the initial parse of a new solution, especially in extremely large solutions where parsing may take several minutes. (Unreal Engine developers take note.)

Bug Fixes
[VS2019] Fix for loss of VA functionality (and potential crash) that occurs in recent VS2019 updates when the Preview Tab is enabled. (case=141374) 16742, 16740
[VS2019] Enabled/restored support for completion and suggestion listboxes in C#. (case=137431) 16590, 16625, 16644, 16675
Rename References and Rename Files close files during their operation if more than 50 have to be opened (user is prompted to continue or cancel before closing files). (case=116948) 15227
Fixed files missing from Open File in Solution dialog when "Show only files in the current solution" is unchecked (for some cmake scenarios). (case=141331)
Fixed problem with Add Include that in some cases caused generation of relative path with excessive directory traversal operators (../..). (case=119677)
[VS2017+] Fixed problem in which VA editor colors reverted to previous theme after changing themes and then opening and closing the VA Options dialog. (case=140632)
Fixed placement of generated code when executing Extract Method in a lambda of an inline class method. (case=140886)
[UE4] Dot to arrow conversion is no longer active in hlsl/hlsli/usf/ush files. (case=141003)
[UE4] Fixed case in which Goto might cause stack overflow crash. (case=141444)
Fixed crash upon right-click of serial number edit control in registration dialog that appears during startup. (case=141409)
[VS2010] Fixed crash during exit after having used the debugger. (case=141365)
Fix for flicker of listbox border while scrolling. (case=141179)
Fix for hang during initialization of Code Inspection. (case=141230)
Fix for issue where VA prevented exit of VS process when initiated during load of solution. (case=141007)
Spell check no longer underlines printf format size specifiers %zu and %llu. (case=67155, case=141164) 10749, 16606
Fixed case in which Quick Info creation might cause a hang (regression in build 2341.0). (case=141330)