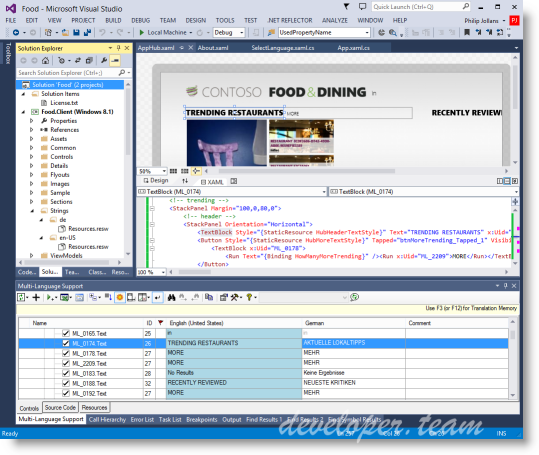 Windows Forms
Windows Store Apps
WPF
Silverlight
ASP.NET 2.0
Compact Framework
MFC (unmanaged C++)
The product is implemented as a Visual Studio Package, which means that it is tightly integrated into the development environment itself. The localization support is based on the built in localization support in Visual Studio and in the .NET environment.

Storing translations and adding runtime support
After entering translations using Multi-Language, the texts are exported to resource files in the .ResX format, used by Visual Studio. The standard localization support in the .NET runtime environment will load the localized texts for the default system language.

Using Multi-Language you can add additional support for

Binary resource files (.res)
On importing a binary resource file, the texts are presented in exactly the format used by the Multi-Language Add-In, as shown below. The first column contains the string ID number, followed by a column for each language. The first two rows contain the language names and the locale ID numbers.

Only string resources are imported.

On exporting, you have the options: