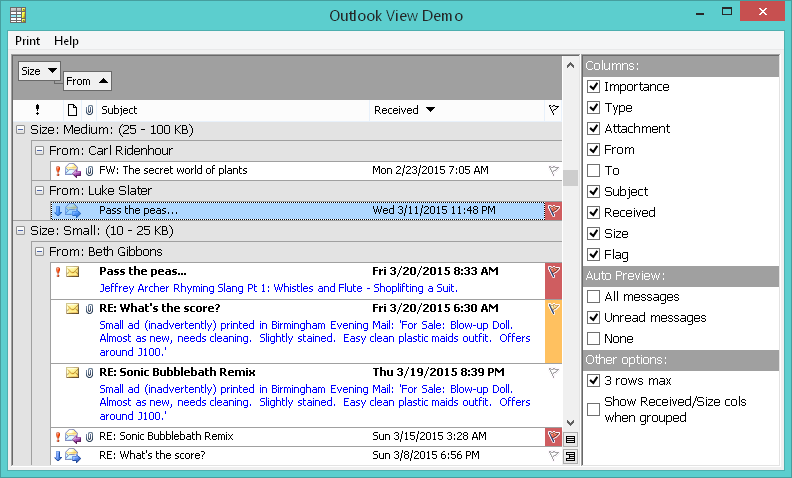 iGrid.NET is a versatile WinForms grid control for the Windows Forms platform, which is a part of Microsoft .NET Framework and .NET Core. Software developers use iGrid for WinForms to build highly adjustable tabular interfaces. It is fast, feature-rich and the ideal unbound grid component for WinForms .NET.

This WinForms software component is based on the successful ideology of iGrid ActiveX grid control, but also enhances its ancestor a lot. 10Tec WinForms grid was rewritten from scratch to use the capabilities of the new .NET platform:

Among the main new features of 10Tec WinForms grid you will find:

the print/print-preview and autofilter functionality;
the group box above the column headers area;
header with several rows that allows you to merge column headers vertically and/or horizontally;
frozen, or non-scrollable rows and columns with customizable edges;
new formatting options for cells - vertical text direction, different text trimming options and so on;
full support for right-to-left mode with one boolean RightToLeft property;
highly adjustable scroll bars - you can make them always visible or hidden, they can be semi-transparent or even have additional custom buttons!
Applications with 10Tec WinForms grid component are developed mainly in Microsoft Visual Studio .NET, but the grid can be used in other development environments allowing you to create applications for the .NET Windows Forms package. iGrid.NET works well in all 32-bit and 64-bit versions of Windows with the installed .NET Framework (all client and server editions - Windows XP, Windows Vista, Windows 7, Windows 8 and Windows 10; Windows Server 2003/2008/2012/2016/2019).

The latest version of iGrid.NET is intended to be used with the Microsoft .NET Framework 2.0-4.8, .NET Core 3.0 and Visual Studio 2005-2019. It fully corresponds to the requirements of the minimal subset of the .NET Framework called "client profile". Both CPU architectures, x86 and x64, are fully supported.

The demo installation of iGrid.NET contains the build of control compiled specially for the .NET Framework 4 and later versions. Special builds of the latest iGrid.NET for the previous versions of the .NET Framework (2.0 and 3.5) are available as separate downloads on demand. They have no functional limitations and can be ordered like the latest build of the component using the same order pages.

iGrid.NET is a CLS compliant control. This means that the control can be used with any language that supports this specification. iGrid.NET was tested in all major Microsoft development environments including C#, VC++ and VB.NET, and it works properly in these CLS-compliant environments.

The core grid control is written entirely in C#, and it is a 100% .NET native control except some blocks of code marked as "unsafe". First, these are .NET native pointers used to significanlty increase the performance of the component. Without them, iGrid would not be super-fast in data uploading and manipulation. Second, iGrid for .NET calls Windows API functions to provide the look-and-feel fully compatible with the OS (the same visual effect while opening its drop-down lists, drawing some items using the current visual style, etc).

This version of iGrid.NET is still available for ordering for the same price as the latest release. To evaluate it before purchase, download the corresponding installation from the Previous Versions download page.

Required files
All the functionality of iGrid.NET is provided by the corresponding version of the .NET Framework and the OS, and no additional components are required to be installed to use all the features of the product.