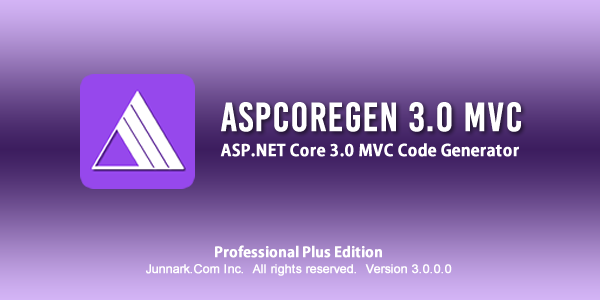 More Code Organization
For example: controller code is separated by actions (used by views), private methods, and methods
used by the jqgrid in regions.

Web API
It now returns the same data as the Business Layer for Get methods, no more returning JQgrid-specific data. Data can now be used by other controls.

Two New Views
A view where you can Delete Multiple records w/ CRUD functionality, and a view w/ a Drop Down List where you can show related data based on the selected item.

Better Documentation
A lot more documentation and tutorials for the Professional Plus Edition.

Shown below is a visual reprensentation/flow of how AspCoreGen 3.0 MVC generates code.

- Generate additional files such as Models and View Models

The generated middle tier objects (and data tier objects) are generated in another application (class library project) and can also be consumed by other clients. Clients could be a web form (.aspx), a win form, or a web service (.asmx, wcf), etc. Or better yet you can choose to generate the Web API (optional) and get all the other clients to access this extra layer instead.

The middle tier encapsulates all calls to the data access objects (data tier) so that calling a CRUD (create, retrieve, update, delete) and other operations are very easy and may only take one line of code for most parts. We made it even easier by generating and showing an example for each CRUD operation, for each table in your database, so you just copy and paste a call from your chosen client.

Web Application Project
This is the ASP.NET Core application which mostly contains UI components, or the Presentation Layer.

Views
Controllers
Stylesheets
Images
jаvascript scripts and libraries
Code Examples
Miscellaneous files that completes an ASP.Net Core web application
Class Library Project
This is the API application that contains the Middle and Data Tier code which is shared between the Web Application and Web API

Controllers
Miscellaneous files that completes a Web API application
Stored Procedures
This is Not a project or an application. These are SQL scripts directly generated in your Microsoft SQL Server. 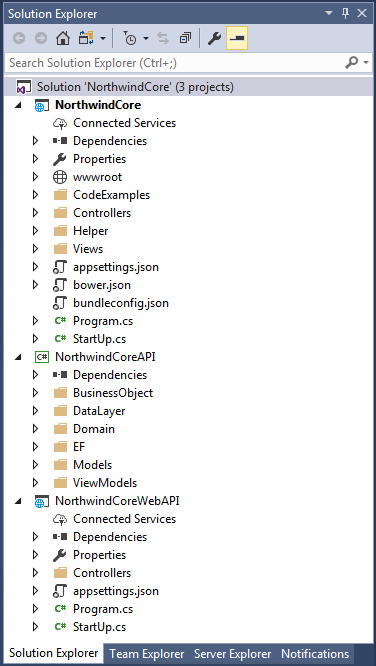 You can download six sample projects below generated by AspCoreGen 3.0 MVC. Please make sure to read the Readme.txt file for instructions. You will need Visual Studio 2019 and Microsoft SQL Server with the Microsoft Northwind database installed to use any of these sample projects. You also need to install the .NET Core 3.1 SDK in your machine. Right-click the download links below and choose "Save target as" in the context menu, and save it to your computer.

Listed below are quick descriptions of the ASP.NET Core MVC Views AspCoreGen 3.0 MVC generates that makes up the Presentation Layer (Front End). Note: All generated views with a grid also have paging and sorting functionality. CRUD are database operations which means: create (add a new record), retrieve (get an existing record), update an existing record, delete an existing record.

Listed below are quick descriptions of the Web API controller class files AspCoreGen 3.0 MVC generates. These Web API methods encapsulates calls to the Middle Layer methods. Generating Web APIs are optional. Web APIs can be a client and act as another middle layer. Generated Web API methods can be accessed publicly and can act as a service to other clients (winforms, web forms, other api or service like a wcf app, mobile app, etc). So you can also build a desktop app that can access the same API your ASP.Net Core app is using through the Web API. Clients/consumers of the Web API does not have to be a windows program, it returns collections as JSON data, or you can pass it JSON data when saving a new record or updating an existing record.

Web APIs are generated as a separate ASP.NET Core project in the same solution as the generated web application.

The generated Web APIs can be consumed by various clients as mentioned above. Here are some code examples on how a windows-based client such as an MVC web app, web forms, win forms, web service (.asmx, wcf), etc can access the API. The examples below shows how to consume/call the generated Web API.

Note 1: Examples below shows Microsoft C# examples. Because these are Web APIs it can also be accessed by other programming language like PHP, or Java, etc.

Note 2: We made it even easier by generating all the code examples for each of the method that you can access. More operations can be consumed as shown here, and these operations are generated for each of your database table.

Select/Skip/Take
For example Sort Products in descending order, Skip the first 20 records and then Select 10 Product records. This will return a strongly-typed ProductsCollection collection. You can then just assign the returned collection to a GridView (web forms), or use a loop through the collection using foreach.

Listed below are quick descriptions of the Middle Layer class files (generated in the Class Library Project) which includes Business Object class files AspCoreGen 3.0 MVC generates that makes up the Middle Tier. In a 3-tier infrastructure, middle layer code is called by the UI or presentation layer code. It can contain business computations applicable to the application's purpose. It also contains calls to the data layer code.

Listed below are quick descriptions of the Data Layer class files (generated in the Class Library Project) AspCoreGen 3.0 MVC generates that makes up the Data Tier. In a 3-tier infrastructure, data layer code is called by the middle layer code. It contains calls to the database (stored procedures/Ad-Hoc SQL/linq-to-entities using Entity Framework Core).

Accessing Code From The Middle Tier

Listed below are quick descriptions of the SQL Stored Procedure, Ad-Hoc DQL, or Linq-to-Entities queries AspCoreGen 3.0 MVC generates. When you choose to generate stored procedures, these scripts are directly generated in the database. Otherwise, when you choose linq-to-entities or Ad-Hoc SQL, these SQL scripts are generated in class files added to the web application's Class Library project.

AspCoreGen 3.0 MVC generates 3 projects/applications in a single ASP.NET Core 3.1 Web Application as mentioned here. Listed below are quick descriptions of the Miscellaneous files and folders generated to complete each of the three applications that are generated.

Note: List below may not contain the full list of miscellaneous files generated by AspCoreGen 3.0 MVC. To get a more complete list, please read the Discussing the Generated Code for Database Tables under tutorials.

We are pleased to announce the first release of AspCoreGen 3.0 MVC Professional Plus. Please see the list of features for this release.

Generates miscellaneous items that makes up the the separate projects such as (but not limited to):

Can generate code for:

Generates data layer code with a choice of:

MVC Views can use JQuery UI Themes with a choice of the following:

Corrected an error when updating the application. The application crashes during an update, this error has been fixed.

Updated generated code for the "List with Manual For Each Loop". The list skips the first record and therefore not shown in the grid. This error has been fixed.
Added code for a URL Referrer for the Add and Update links for: ListCrudRedirect, ListForeach, ListMultipleDelete, and ListBy Foreign Key MVC Views. Also added URL Referrer for the Record Details links.
Removed list of Entity Framework classes in the Home (Default) MVC view for the Express Edition.