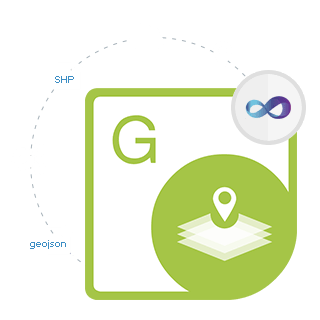 Aspose.GIS for .NET enables you to access & manipulate geographic information from vector-based geospatial data formats. API supports to read, write & convert most popular GIS file formats such as Shapefile, GeoJSON, FIleGDB, KML & OSM XML as well as render a map from supported formats to SVG. Furthermore, a developer can easily customize rendering and feature styles to get the desired map look.

Aspose.GIS for .NET is designed with simplicity, performance, usability & portability in mind. It contains APIs to be used with .NET Framework, .NET Core & Xamarin platforms, enabling you to build cross-platform applications with great ease.

Single API for Various Formats
Aspose.GIS takes care of all tedious details of data formats and provides you with a clean and simple object model for GIS data. You can read or store data in files with a universal, format-independent code.

Convert GIS Data Between Formats
Converting GIS data from one format to another with Aspose.GIS usually takes just one line of code.

If necessary, you can perform additional operations during conversions such as adjustment of data attributes schema or on-the-fly reprojection of feature geometries.

Some examples of supported format conversions:

Render Maps
Data is only useful when someone can see it. .NET GIS library makes it easy and fast to export GIS data to vector or raster images and provides rich symbology for complex visualization scenarios.

Use Different Coordinate Systems
With Aspose.GIS, you can transform geospatial coordinates, geometries, and whole layers from one coordinate reference system to another. Cartographic projections as well as geodetic transformations are supported.

You can either look up a coordinate reference system by SRID, import from WKT or set custom parameters directly in the code.

Perform Spatial Analysis
Aspose.GIS includes a full set of spatial predicates based on the DE-9IM model that evaluates topological relationships between objects. Typical cases are: