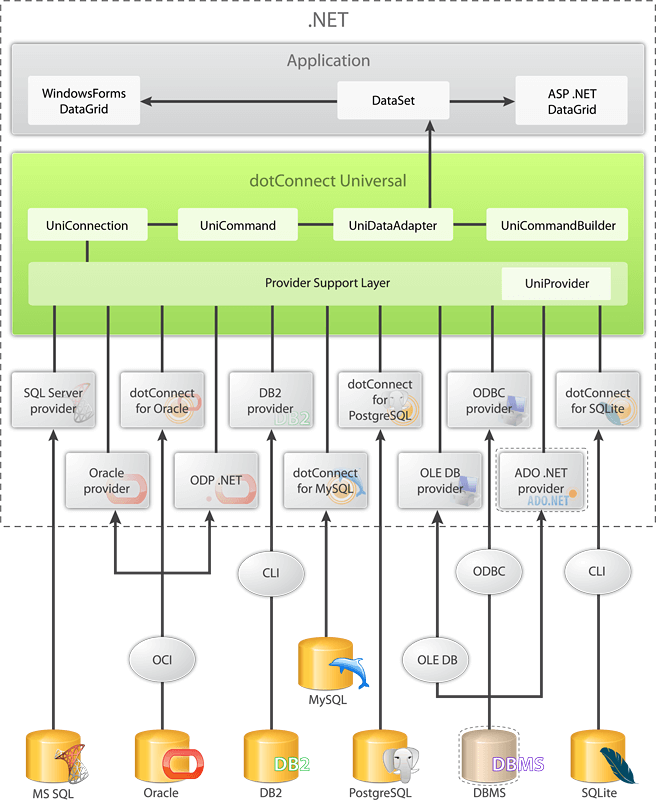 dotConnect Universal offers universal access to data of different databases for the Microsoft .NET Framework. It supports most of major database servers, including Microsoft SQL Server, Microsoft Access, Oracle, DB2, MySQL, PostgreSQL, SQLite, InterBase, and Firebird. Other servers can be accessed through their ADO.NET, OLE DB and ODBC providers.

dotConnect Universal provides functionality for connecting to a database, executing commands, and retrieving results. These results can be processed directly or placed in an ADO.NET DataSet for further processing in disconnected state. While in the DataSet, data can be exposed to the user, combined with other data from multiple sources, or passed remotely between tiers. Any processing performed on the data in the DataSet can then be reconciled with the database.

The following diagram illustrates dotConnect Universal architecture. The green area represents some of dotConnect Universal components. The lime area unites bundled providers in the Professional Edition. The rest of the diagram objects represent data access elements inside and outside of the .NET Framework.

There are core classes that make up dotConnect Universal. The following table describes those classes and their functions.

UniConnection - Establishes a connection to the database server and begins a transaction.
UniCommand - Executes SQL statements and stored procedures at database, and exposes parameters.
UniDataReader - Exposes and reads a forward-only stream of data from the database.
UniDataAdapter - Populates a DataSet and resolves updates with the database.
UniTransaction - Manages database transactions.
UniParameter - Defines input, output, and return value parameters for commands and stored procedures.
UniException - Returned when an error is encountered on a database.
Along with the core classes listed in the preceding table, dotConnect Universal also contains the classes extending its base functionality and allowing to accomplish additional tasks.

UniCommandBuilder - A helper object that will automatically generate command properties of UniDataAdapter and populate the UniParameter collection of UniCommand object.
UniConnectionStringBuilder - Designed to construct a connection string by assigning values to appropriate properties.
UniMonitor - Monitors dynamic SQL execution in applications that use dotConnect Universal.
UniProvider - Represents a custom ADO .NET data provider which can be used with dotConnect Universal provider.
UniScript - Executes series of SQL statements separated by special symbols.

Key features
The following list presents the main advantages of the dotConnect Universal.

Supported providers
dotConnect Universal is shipped with support for a set of ADO.NET providers.