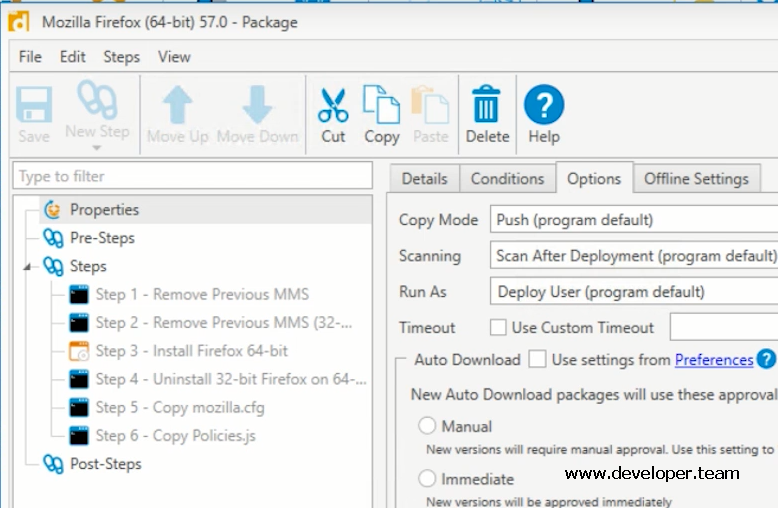 Set it ‘n Forget it
Never miss a critical patch again! Common applications (including Windows Monthly rollups) can download automatically and deploy on your schedule or even when offline targets come online when integrated with PDQ Inventory. Rest assured your patch updates are going out even when you are not in the office. Isn’t it time for that much-needed vacation?

Easily Execute Scripts
Run and deploy common scripts like .vbs, .reg, .bat, and .ps1. Execute from a file, or write them on the fly. The possibilities are almost endless. PDQ.com also has many resources for PowerShell, too. Start honing those scripting skills.

Ready-to-Deploy Applications
We maintain a library of over 175 ready-to-deploy popular applications so you don’t have to. When a new version of an application is released, PDQ.com updates and tests them and makes them available as soon as possible. You’ll wonder how you ever lived without it.

Email Notifications
Wouldn’t it be nice to glance at the inbox on your phone and see that deployment or schedule was successful? You won’t even have to put down that drink or game controller. PDQ Deploy is the assistance you always wanted!

Multi-Admin Access With a Shared Database
Share deployments, schedules, lists, and even preferences between PDQ Deploy consoles by creating a server/client relationship. Processes are initiated via either the console or Command Line Interface (CLI) but use the Server’s database. Why do all the work twice?

Deploy using the optional Agent (beta)
The Agent is an optional service installed on computers in the PDQ Inventory database. It is used to perform tasks that would typically require a direct connection and use of the normal PDQ Inventory service. With PDQ Deploy 17, we’ve now added the ability to deploy to computers in PDQ Inventory that have the Agent installed. Even computers outside your network!