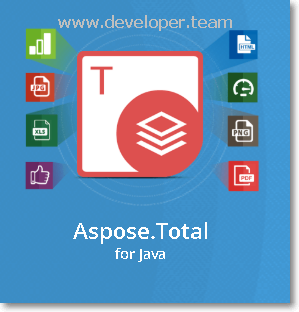 Manipulate Word, Excel, PowerPoint, Outlook, PDF, 3D, CAD and other document formats from your own Java applications. Aspose.Total for Java is a collection of file format APIs for Java developers, empowering them to create, update, print, render and convert between multiple file formats from within any Java J2SE, J2EE, J2ME applications.

Aspose.Words for Java
Aspose.Words for Java allows the developers to perform a great range of document processing tasks directly within Java applications. It supports most popular word processing formats including DOC, OOXML, RTF, HTML and OpenDocument. With Aspose.Words, you can generate, modify and convert documents without using Microsoft Word.

Aspose.Tasks for Java
Aspose.Tasks for Java is a project management API that enables Java application developers to provide Microsoft Project document manipulation capability in their applications – all without using Microsoft Project. With this powerful API, developers can control various stages of project management such as project planning, definition and tracking.

Aspose.3D for Java
Aspose.3D for Java API is built to create, edit, manipulate and save 3D formats. It empowers Java applications to connect with 3D documents without installing any software package on the computer, and assists the developers in modeling and creating game worlds & scenes for design visualization.

Aspose.Page for Java
Aspose.Page for Java is a PostScript and XPS document parsing and processing API. Developers can easily convert PS & EPS files to PDF and raster image formats. API also allows the developers to create, parse and save XPS files without any dependencies.

Aspose.OMR for Java
Aspose.OMR for Java is an API to recognize optical marks from OMR digitized sheet images as well as from different image formats like BMP, JPG, TIF, TIFF, GIF. API captures human-marked data from document forms like surveys, questionnaires, MCQs etc. The base of recognition is template markup having a graphical mapping of the elements to be recognized from the scanned images.

Aspose.HTML for Java
Aspose.HTML for Java is an advanced HTML manipulation API that allows creating, loading, editing or converting (X)HTML documents within the Java applications. The API also provides a high fidelity rendering engine for PDF, XPS and a number of raster image formats.

Aspose.Imaging for Java
Aspose.Imaging for Java is an imaging API that lets developers edit, create, draw or render images in their Java applications. It offers a broad spectrum of traditional image processing operations as well as most demanded features that make it the most widely used imaging engine.