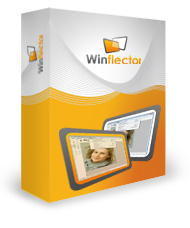 We offer one of the best virtualization software available on the market – Winflector. It allows easy, fast and effective applications sharing over a network, without excessive consumption of computing and network resources. One central application server, on which the programs are executed, gives easy remote access to selected apps through lightweight client available for Linux and Windows. If you are looking for an alternative for Remote Desktop Services (Windows Terminal Services), Citrix XenApp, VNC etc. – Winflector, one of the best low-cost and efficient virtualization software, is for you.

Winflector is innovative, secure and easy to use software, which allows effective sharing and remote execution of chosen applications through local and wide area networks. Its basic features include:

low costs: applications executed remotly over a network
works over LAN, Internet, as well as dedicated connection, also at low throughput
application is exectuted on a main server, while a remote user acesses only its windows
the application server administrator decides which program(s) to share
Winflector allows sharing of any Windows application, which can be executed by remote users without any modification of the application code, preserving its original appearance and functionality.
Thanks to Winflector server, the applications are executed only on the central machine, while the remote users, using a lightweight client supporting Linux, Windows, Android and HTML5 browser access them the same way they would do locally. Winflector does not use Remote Desktop Services (earlier Windows Terminal Services), RemoteApp or Citrix products (XenApp).

Remote desktop - is it the best solution?

A business application user needs to access applications and their functionality. In this case it is preferable to use a Winflector server, which enables the Windows application to be accessed as if they were locally displayed on the user's desktop. This way, a middle layer of remote desktop is eliminated, along with its increased bandwith usage and heavy interface, which makes it harder to use the actual application and increases the server load. Another advantage of this solution is limiting user access only to application functionality, hence increasing the server security.

Remote desktop is a good solution when one wishes to remotely administrate the computer. In this case, it is efficient to use VNC software or single-user Terminal Services, which is included in the operating system.

Which applications can be shared using Winflector?

Winflector can be used to share any 32/64-bit Windows application approved by the administrator for sharing. Among others the Microsoft Word, Excel, OpenOffice.org, Adobe Acrobat Reader and many other applications, including business or sales management. Winflector server also enables remote execution of Windows console applications running in the text mode, such as the MySQL client.

Winflector is composed of two parts:

server – Windows application server installed on a central computer which also hosts the applications to be shared with remote users
client – launched on the user’s workstation, provides access to the selected application on demand


A standard Winflector installer will install both the client and the server program. The required installation type must be selected as the installer is started (see: step-by-step installation).

The user of the client station launches a small wfc.exe program which connects to the server and starts the selected application on the remote server. After entering the server address, login information and the application name the application window appears on the client display. The application can be run using the local display, keyboard and mouse and it can use local printers. See: step-by-step operation.