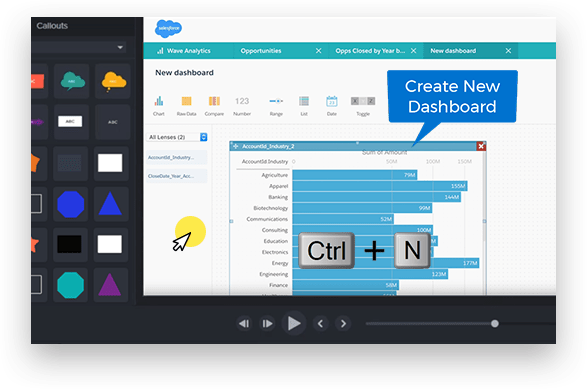 Camtasia makes it easy to record your screen and create polished, professional-looking videos. Record anything — your whole screen or just a window. Or, add video, images, audio, and PowerPoint presentations that you already have. A simple timeline makes editing video easy. Combine or split clips, trim, and speed up or slow down footage. Then, instantly preview inside the video editor. Give videos polish with professional video editor effects. Add highlights, animation, titles, transitions and more. Simply drag and drop the effects onto the timeline.

Everything you need for stunning video
Simply bring in your footage or record a video of your screen, then use the simple editor in Camtasia to create a high-quality video.

Choose your footage
Create a great looking video, even if you've never made one before. Camtasia makes it easy to record your screen or import your own camera footage.

Create your video
Anyone can make an engaging video with Camtasia. You don't have to spend thousands of dollars to outsource your videos or spend months learning a complicated system.

Stunning video effects
Apply Behaviors that are perfectly designed to animate your text, images, or icons. Get a crisp, polished look without being a professional video editor.

Drag-and-drop editing
What you see is what you get. Every effect and element in your video can be dropped and edited directly in the preview window. And you can edit at resolutions up to beautiful 4K, for clear video at any size.

Exceptional performance
Camtasia takes full advantage of your computer's processor with 64-bit performance. You'll get fast rendering times and enhanced stabilityвЂ”even on your most complex projects.

Animated backgrounds
You'll have access to a variety of backgrounds that grab attention right from the start.

Music tracks
Use music to set the mood of your video. All tracks are royalty free and safe to use on YouTube and Vimeo.

Icons
Choose from hundreds of icons, or bring in your own straight from your computer.

Motion graphics
Get lower thirds, intro slides, and more so you can start quickly and look great.