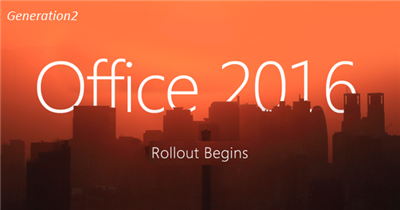 Mcft Office 2016 is the complete, cross-platform, cross-device solution for the modern workplace, with smart tools for individuals, teams, and businesses. It can open your applications, documents anywhere, across multiple devices. Get the installed applications you know and trust – Word, Excel, PowerPoint, OneNote,Outlook, Publisher, Access.

Always have the latest, full installed versions of Word, Excel, PowerPoint, OneNote, Outlook, Publisher, and Access and capture your ideas however you work best – using a keyboard, pen, or touchscreen. Mcft Office 2016 will offer new security, compliance, and deployment features, giving organizations more control over sensitive data and IT more flexibility in deployment and management. Here is a new version of Mcft Office 2016 - update of one of the most important products of the company, which in spite of the status of the Preview is already quite stable.

General Info:
This release contains one ISO [SOURCE ISO] and 21 executable svf-files.
All exe-files are created from original ISO's for each language.
This is done with SmartVersion, a program that calculates the difference between two files (one of which is used as the source) and then creates an svf-file based on that difference.
Source ISO: Office16.x64.en-US
Languages: Arabic, Brazilian, Croatian, Danish, Dutch, English, Finnish, French, German, Greek, Hungarian, Italian, Latvian, Norwegian, Polish, Portuguese, Russian, Slovenian, Spanish, Swedish, Turkish, Ukranian