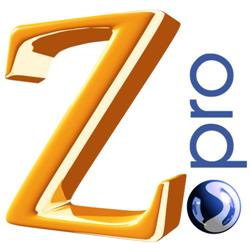 form•Z pro is a powerful 3D design application featuring a variety of modeling personalities and tools with an easy to use interface to express and communicate your imagination. It is based on advanced 3D solid and surface modeling methods that maintain accurate representations as you progress from design to visualization, layout, animation and fabrication.

form•Z pro includes all of the features found in form•Z Jr plus many advanced modeling tools, STEP and IGES translators, animation, layout, network rendering and interface customization. form•Z pro 8 is the latest version that introduces subdivision modeling as yet another modeling personality that enables the quick design and exploration of organic forms that originate from basic shapes. These forms are easily manipulated using a suite of subdivision tools that empower this new personality.

We have posted v9.0.0.3 today to address some reported issues with formZ v9. This version can be now installed using the link you received with you v9 codes. Here is a list of some of the more important improvements.:

• The on-line manual has an updated interface including a better Index and search features, and loads properly from the application.

• The Action palette shows the active tool as expected.

• The “Keep Proportional” option now works properly in the place component tool and the Component parameters of the Inspector palette.

• Editing object names that are inside groups in the objects palette now show in the proper locations.

• Resizing a palette while editing a text field no longer causes top edit field to move to the wrong location.

• A detached Modeling tool palette can now be reinserted in the dock by dragging the palette such that the cursor inside the dock while pressing the Command (Mac OS) or ctrl (Windows) key.

• Preview renderings for RenderZone or V-Ray for form•Z no longer hang or crash when clicking in the Materials or Material parameters palette before the preview rendering is complete.

• Export to .skp no longer crashes when Keep textures is NOT selected.

• Drag and drop now works properly in the Objects palette.

• Switching to another application and back to form•Z when there is more than one project open, no longer switches the active project.

• The “options” button in the export file dialog no longer crashes on 10.14 and later.

• Import from Drafting now available in Modeling app imports the drafting space of a .fml file onto the current reference plane of the model.

• Switching between layout and Draft spaces refreshes the window properly.