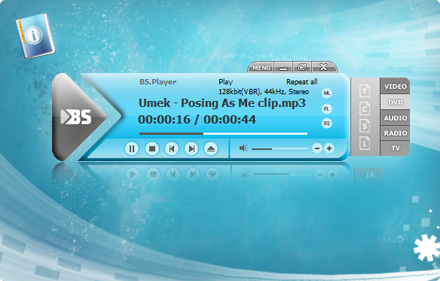 Ever since the very beginning in the year 2000, the BS.Player has been one of the world's most popular multimedia players. It is popular for many reasons, one however should be pointed out: BS.Player is the first player ever to enable its users to focus on watching the movie instead of dealing with poor computer capabilities or running around looking for a proper setting and codec.

Because it does not use much processing power it is suitable for all those who use slightly less capable computers. The multimedia playback has not been and will never be disturbed by any annoying technical problem often experienced with software of this kind.

Playlists support
The playlists support is great. They may be imported from BST and M3U (Winamp) records, saved, edited and added new files from any folder, as well as URLs.

Capture Video to file
You can capture video from any source directly into any format that your preinstalled codecs support (such as most popular WebM, XviD, 3IVX...).

Network file buffering
BS.Player PRO will buffer desired portion of a multimedia file to a cache, and play it from cache instead of playing it directly from the hard drive. You can buffer from CD drives, network drives, wireless networks... No more laggy playback!