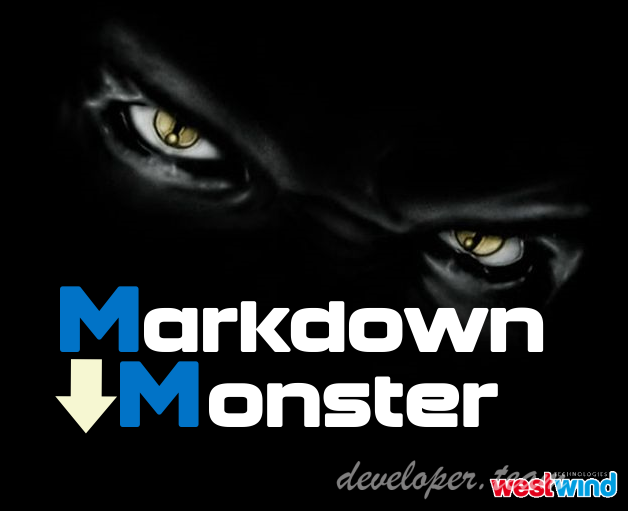 Markdown is everywhere and many of us are using Markdown for all sorts of different purposes. Wouldn't it be nice if you have an editor that can keep up with all of those scenarios? Markdown Monster is a Markdown editor and viewer that lets you edit Markdown with syntax highlighting and fast text entry. A collapsible, synced, live preview lets you see your output as you type. You can easily embed images, links, emojis and code as text or by using our gentle UI helpers that simplify many operations. You can also paste and drag images directly into the editor. Inline spell-checking and word counts keep your content streamlined unobtrusively.

You can export Markdown to HTML by saving to disk or by exporting text selections of Markdown generated HTML directly to the clipboard. The HTML preview can display syntax colored code snippets for most common coding languages, and it can easily be customized with HTML and CSS template to match your own sites and preferences. You can choose from a number of editor and preview themes and you can even use Vim or EMacs type conventions. Both the editor and preview can be customized with themes that are extensible with Web technologies. Other convenience features let you browse for and select files using the built-in folder browser, jump to the current folder in Explorer or the Terminal, print the current document's HTML output, and more.

Extensible via .NET Addins
In addition to building an attractive and highly functional Markdown editor, we also wanted to make sure the editor is highly extensible, so you can plug in custom features of your own. Markdown Monster includes an easy addin model that makes it easy to build extensions that let you hook into the UI, the editor behavior and the publishing process. We also provide some useful .NET Scripting and Text Templating addins that let you automate many tasks without creating a full addin. We use this same add-in API to build some of Markdown Monster's internal features so the sky's the limit. Find out more about creating an addin with .NET.

Warning! You are not allowed to view this text.
Web Development
Tweet